Bermuda’s fossil record is relatively short in geological terms, stretching back only 1 million years or so. This means that the majority of species whose remains have been preserved in the limestone rock have living representatives in Bermuda’s environment today …. or would have, had it not been for human intervention. The categories of fossils found on Bermuda are: 1: Remains – such as shells and bones; 2. Impressions – such as moulds and casts; and 3. Traces – such as burrows and tracks.

The best preserved and most numerous fossil “remains” found on Bermuda are those of molluscs. These can be divided into shells of land snails (gastropods) and shells of marine organisms (gastropods and bivalves). The land snail shells are found in fossil soils, or palaeosols, of all ages. They belong to the genus Poecilozonites which is endemic to Bermuda and includes species such as Poecilozonites nelsoni (Figure 9a) and Poecilozonites bermudensis (Figure 9b). The former is now extinct but the latter survives in very limited numbers in isolated locations on Bermuda. A detailed account of the evolution of Bermuda’s Poecilozonites land snails was compiled by the world-renowned evolutionary biologist Stephen Jay Gould in the process of acquiring his doctorate (GO2).

The majority of ancient  molluscs and corals found on Bermuda were, soon after their death, dislodged from the position in which they lived by wave action and currents. Their broken and worn fossil remains are preserved in what is known as a “death assemblage” (Figure 4b, Chapter 4). The remains of bivalves (molluscs with a pair of hinged shells, or valves) are dis-articulated, meaning that the two halves of the shell, which in life were joined along a hinge line, are now separated. The value, for interpretation purposes,  of such fossil remains in a death assemblage is considerably less than those, few, found undisturbed in their life position, or a life assemblage.

Accumulations of fossil marine mollusc remains are most commonly found on Bermuda’s south shore in the middle parishes of Paget, Devonshire and Smith’s and on the islands of the Great Sound. They take the form either of shelly layers within ancient beach deposits (Figure 9c) or as unstructured accumulations known as conglomerates plastered against rocky shores. Occasionally a marine deposit which is constituted entirely of fossil sea-shell remains, known as a “coquina”, can occur but this is rare on Bermuda (Figure 4b, Chapter 4).

Coral remains are much more elusive than those of marine molluscs, on Bermuda. Nevertheless the occasional identifiable coral fragment can be found, ranging in size from a finger tip to a basket ball (Figures 9d and 9e). Typically, they are mixed in with coarse sand or deposits of rounded limestone debris, or marine conglomerates. Corals comprise a chemically more closed system than molluscs and their age (years since their death) can thus be more reliably determined by a process of chemical analysis known as U-series dating. This, in simple terms, is achieved through measurement of the ratio of radioactive uranium (which during the coral’s life is absorbed from sea water)  to its daughter element thorium (which is produced very slowly through the decay of uranium).

Armed with reliable U-series radiometric dating technology, the discovery of a fossil coral fragments has made it possible to establish with confidence the ages of Bermuda’s two most extensive marine limestones and their associated dunes, or eolianities. These belong, respectively,  to the Rocky Bay Formation dated at approximately 120,000 years before present (LA2,HA1,HE2,MU4) and the Belmont Formation dated at approximately 200,000 years before present (HA1,HE2,MU4,RO4). Younger 80,000 years (HA1,VA2,LU1,MU4) and older 400,000 years (HE3) marine deposits do exist but very few have been reliably dated.

As mentioned earlier, in only a very few cases, on Bermuda, are fossil remains of marine organisms found preserved in their life position – either attached to a rock surface (Figures 8b, Chapter 8)  or buried in the sediment into which they had burrowed before their demise (Figure 9f). Such life-position marine fossils can, when found above present sea level, afford some of the best direct evidence of a past higher sea levels (Chapter 8).

Apart from molluscs, fossil land animal remains are extremely rare on Bermuda, as they are elsewhere in the world under normal circumstances. Nonetheless, skeletons of birds (OL1) and of a complete sea turtle (Figure 9g) have been found in late Pleistocene dune deposits; and, surprisingly, that of two tortoises were discovered separately in much older deposits  (ME3,OL3). The one environment, on Bermuda, in which conditions favourable to the preservation of old fossil remains can prevail is within a cave (Figure 9a). Animals, dead or alive, which fall into a cave may be sheltered from biological, chemical and mechanical processes which degrade their skeletal remains on the land surface. A prime example is to be found in Admiral’s Cave, of Hamilton Parish, where  a 12 m (40 ft) high pile of debris, or talus cone, accumulated beneath an opening, or skylight, in the cave ceiling.  Skeletons of a wide range of  animals, principally comprising birds, have been retrieved from this pile and catalogued.  These specimens, dating back as far as 130,000 years before present, have yielded, and continue to yield, a veritable treasure trove of palaeo-biological information.  They include species not known to have existed on Bermuda, and some which are new to science (HE8).

Figure 9f. Fossil bivalave in its life-position at Lodge Point. Ireland Island North.  This burrowing bivalve of the genus Lucina is  preserved  in marine sediment of the Rocky Bay Formation at this locality.  The valves are open but remain attached to each other at the hinge (i.e. the specimen is articulated) indicating that it  was buried in, or very close to, its life position. Cross-bedded marine sands overlying this deposits indicate that burial by a rapid influx of  marine sands  was responsible for the Lucina’s demise. (Scale: 5 cent coin provides scale)

When a plant or animal dies, more often than not it will either: decompose, be consumed or be broken down by erosion. If, however, it is buried by sediment before it suffers one of these fates, its skeleton may be preserved as “remains” (discussed above). Alternatively, its existence may be recorded by an impression in the sediment. If its external form is preserved, this impression is known as a mould. If a three-dimensional  replica of the “body” of the plant or animal is preserved, it is known as a cast.

Episodic dune activity on Bermuda has, over time, condemned countless plants, including whole trees, to burial  by sand. The preservation of an impression of a buried plant depends on its ability to resist decomposition whilst the sand around it undergoes compaction, or lithification. A mould is formed where the sand has been pressed against the surface of the plant. Impressions of palmetto fronds are examples that can occasionally be observed in Bermuda’s limestone rock faces (Figure 9h).

Upon decomposition of the body of a buried plant, a void is created in the compacted sediment which entombed it. When this void is infilled with loose sand from a later dune, it forms a cast. In the case of tree trunks (typically palmetto or cedar), this cast is preserved as a pillar of structureless sand, which sometimes can be seen to extend upward from the fossil soil in which it was rooted. Impressions of roots of small plants which grew among the dunes are also sometimes preserved as fragile branching casts.

Preservation of the casts of large trees buried in lithified sand dunes, or eolianites, as shown in Figure 9j (and the group of photos below), offer us clues about the environment in which dune building took place. Their presence combined with that of numerous fossil land snails preserved in weak  soils  within the eolianites, infer the co-existence of dunes and a lush forested landscape. Climatic conditions must have been similar to those of today except that in the absence of species introduced by humans, the forests would presumably have been dominated by palmettos  (Sabal bermudana) and cedar trees (Juniperus bermudiana). 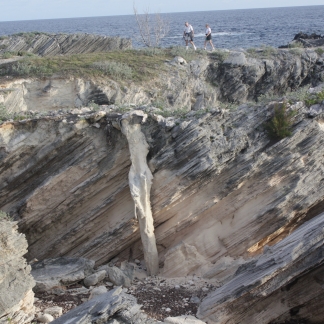 Cooper’s Island. 10 m high tree cast has proved more resistant to erosion than the dune which entombed it.

The Airport at St David’s. This 10m high fossil tree cast extends up from the fossil soil out of which it once grew. 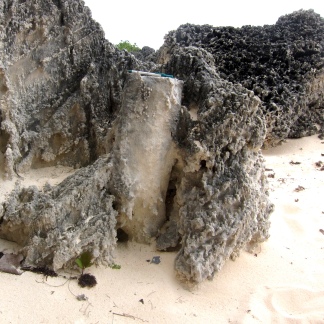 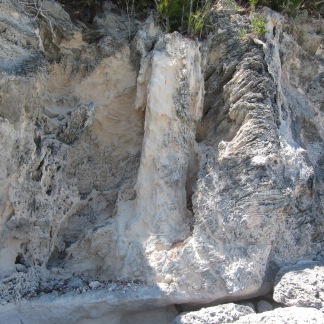 Saucos Hill. This 1 m diameter tree trunk cast was likely formed by a Bermuda cedar. The fossil soil out of which it once grew can be seen at the bottom.

A disturbance of sediment, such as a track or burrow, caused by the movement or activity of an organism, is termed a trace fossil. Bermuda’s dominant sediment – sand – is, however, not the best medium for preservation of detailed imprints especially when dry.

Burrows are examples of trace fossils that are found on Bermuda. They can be surprisingly well preserved because of the strength of the burrow linings, which are constructed by the inhabitants using special secretions. The re-enforced lining helps the tunnels resist collapse as well as facilitating their preservation until they become infilled with sand. Burrows are particularly noticeable in the geological record where they disrupt stratified deposits of, for example, a beach (Figure 9k). Their characteristics, such as size, shape and length can be used to identify the organism which constructed them. This knowledge can in turn be used to interpret the contemporaneous environment. For example, land crab burrows (built by Gecarcinus lateralis) that are found in the Belmont Formation (Figure 9k) are known, from observation of their modern counterparts, to occupy the beach just above high tide – or the berm.