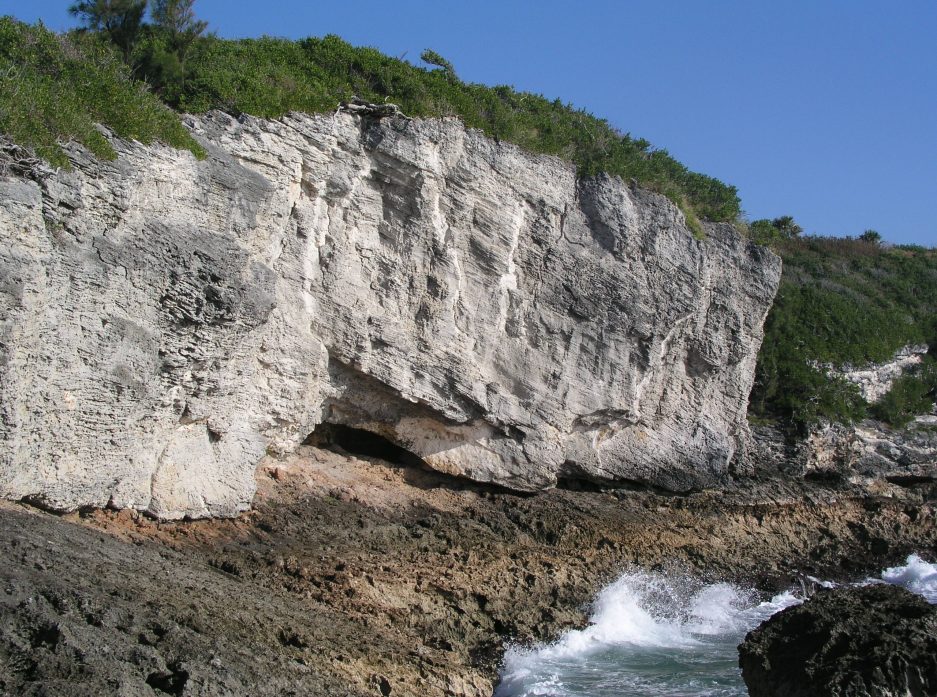 Emergence of the islands

The story of Bermuda began tens of millions of years ago with the formation of a cluster of volcanic seamounts, which emerged from the North Atlantic ocean as islands. These included the main Bermuda Seamount (Figure 1a).  Following a long period of  erosion all of the seamounts were truncated below present sea level. They were then blanketed in accumulations of carbonate sediments composed of the skeletal remains of marine life which had colonised the submerged edifices (Figures 1b and 1c). Only on the Bermuda Seamount did shallow waters persist long enough for  permanent shoals, cays and dunes to form, which eventually became cemented into the Bermuda Islands (Figures 1d and 1 e).

Epic climatic cycles of the Pleistocene Epoch, and associated advances and retreats of the great continental ice sheets, translated into global sea level fluctuations of over 100 m (320 ft) (Figure 8d, Chapter 8). These fluctuations played a pivotal role in the generation and distribution of carbonate sediments on the Bermuda platform.

During episodes when sea level flooded the Bermuda platform, carbonate sand was being generated from the broken skeletal remains of marine organisms, and was accumulating on beaches and intermittently in dunes. When sea levels fell by more than approximately 20 m (65 ft) from their maximum level, these processes were paused as the platform emerged in the form of a large island – Greater Bermuda (Figure 1f) . Such periods of emergence  are recorded in the geological record by extensive well-developed fossil soils, or terra rossa palaeosols, which are interlaced through the limestone deposits (Figure 1g).

There were many climatic cycles during the Pleistocene Epoch, which lasted approximately 2.5 million years.  These cycles became larger in amplitude over the last 1 million years or so, which is the time span within which the limestone islands of the Bermuda  are considered to have formed (HE6).  At a minimum there is evidence of seven of these cycles on Bermuda. They are represented by the five limestone formations (and their sub-divisions) as well as at least six well-developed palaeosols which have been identified and mapped  throughout the islands (Chapter 5).